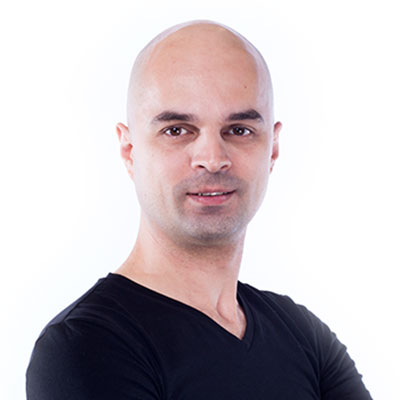 Born in Bucharest, Romania, Ciprian began his dance training at the age of ten when he was accepted to the State Ballet Academy of Bucharest. He studied with ballet masters from the world renowned Vaganova Academy in Russia, Great Britain, and the United States of America. He is the recipient of multiple Golden and Silver Medals in Classical dance and Contemporary dance at national and international professional competitions including Varna, Bulgaria in 1994.

In 2020 he became a PBT (Progressive Ballet Technique) certified teacher.

As a professional dancer, he held the rank of soloist with the Romanian Opera from Bucharest as well as the Serbian Ballet Company from Novi Sad, performing lead roles in many famous ballets and touring more than 25 Countries. Ciprian was also performing in different national television entertainment broadcast. He also studied Jazz in Great Britain.

He eventually returned to the State Ballet Academy of Bucharest as a Vaganova Teacher. He was appointed Regional ballet Co-Ordinator for the SABIS System in the Middle East where he taught in the United Arab of Emirates and Qatar. He was teaching in Italy and then back in Romania then he decided to establish his residence in Vancouver, British Columbia where has been training students in Vancouver, BC since 2013, many of whom have placed in top ranks in various well known [YAGP, IBC] and widely recognized local and international competitions. He is married to Janet and has 3 sons. Andrew was born in Johannesburg, South Africa. At the age of six he moved to Port Coquitlam BC, then he started his formal training at Danzmode Production, under the direction of Rachael Poirier. Spending many hours at the studio, training in a variety of styles, he was able to compete in many local and international competitions. During his training he started his professional dance career working with Patrick Roberge Productions in shows such as Pop City, BC Marketers Awards, and Rick Hansen 25th Anniversary Gala. After he finished his training at Danzmode, Andrew was accepted into the Source Dance Company, directed by Joanne Pesusich. After his two years in Source he was given a scholarship to attend Arts Umbrellas Grad Program, under the direction of Artemis Gordon and Lynn Sheppard . He’s had the pleasure of working with choreographers such as Crytstal Pite, Heather Laura Grey, Amber Funk Barton, Eric Beauchesne, Heather Dotto, and Wen Wei Wang.  He has also just finished his first national tour with Wen Wei Dance Company performing in Agora De La Danse and La Rotonde festivals. Andrew is currently focusing his time on his collective ‘Dance Anonymous’ which will be premiering work in summer of 2022. Andrew’s excited to join the Pro Dance faculty!

Keep up to date by following us on these popular social networks.

Read what our students and parents are saying about our school and lessons!